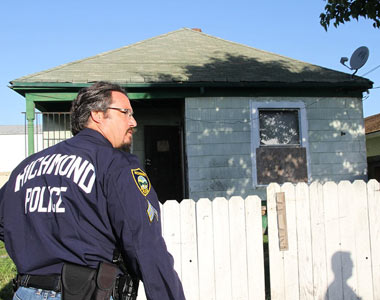 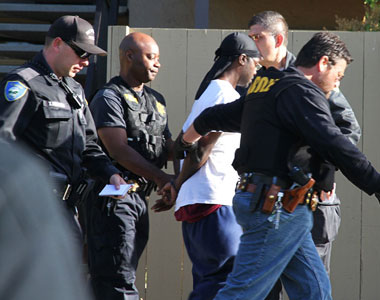 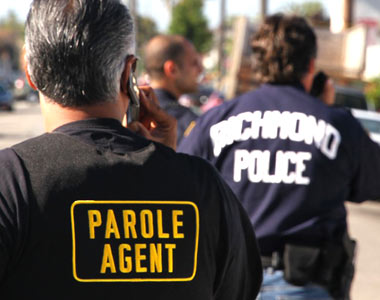 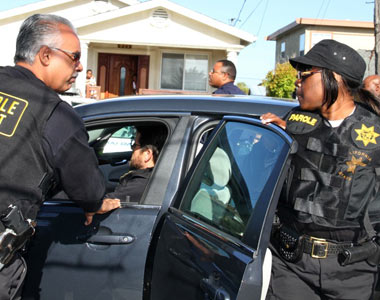 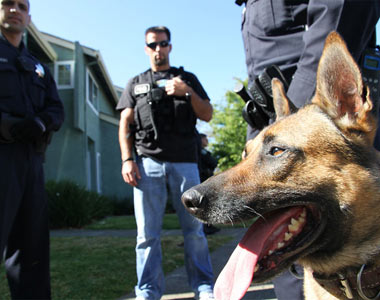 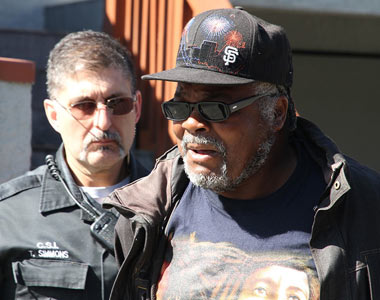 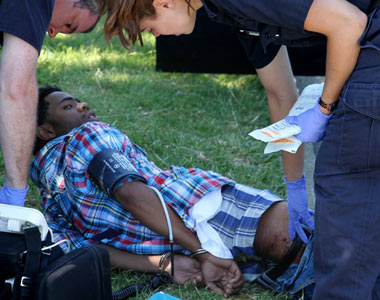 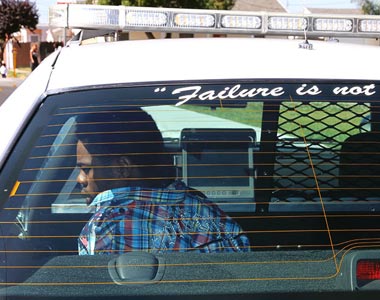 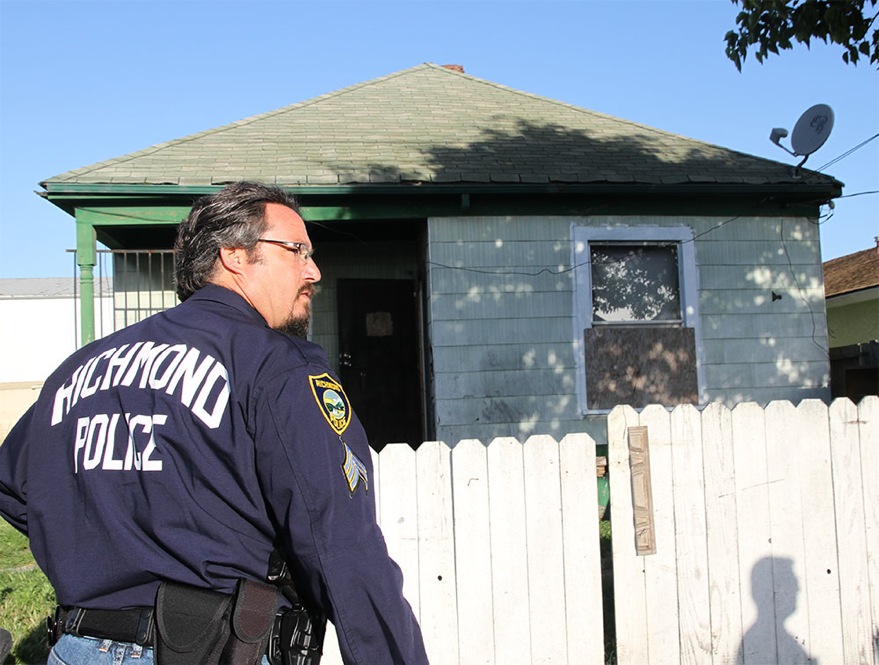 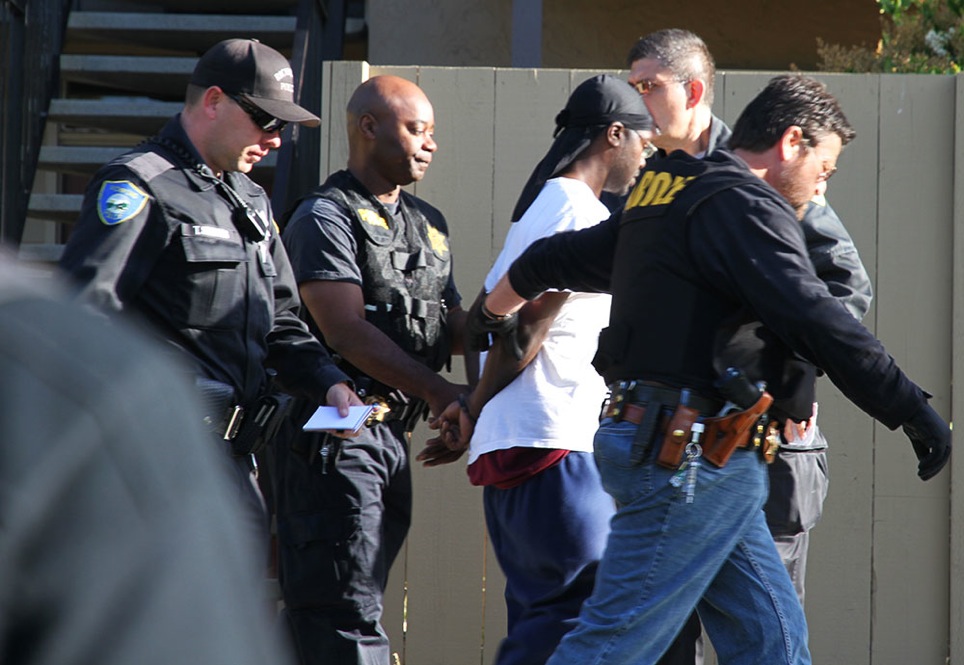 Police forced open the door of this parolee’s apartment and took him back into custody. 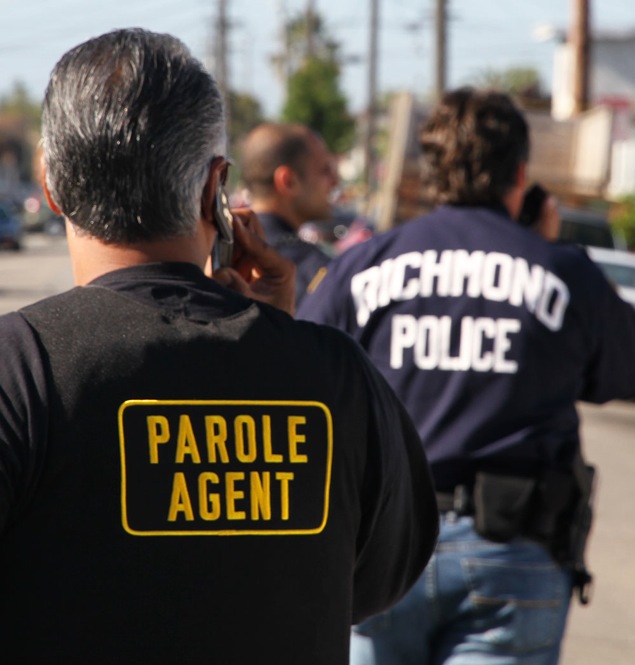 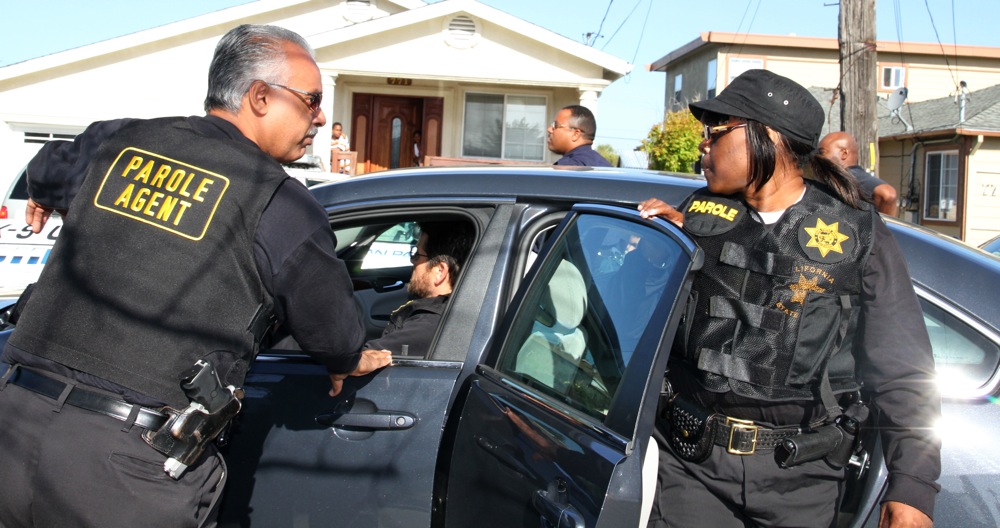 Parole agent Teddy Pacheco, left, and about a dozen other agents and police searched
several blocks unsuccessfully
for a missing parolee in Richmond. 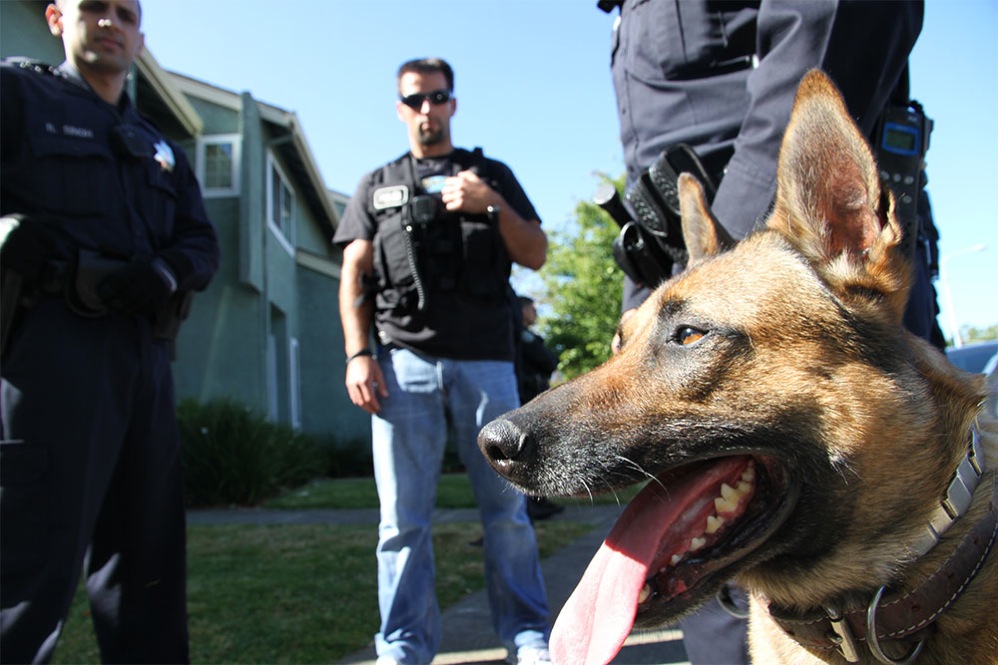 Police officers and parole agents use dogs during compliance checks. 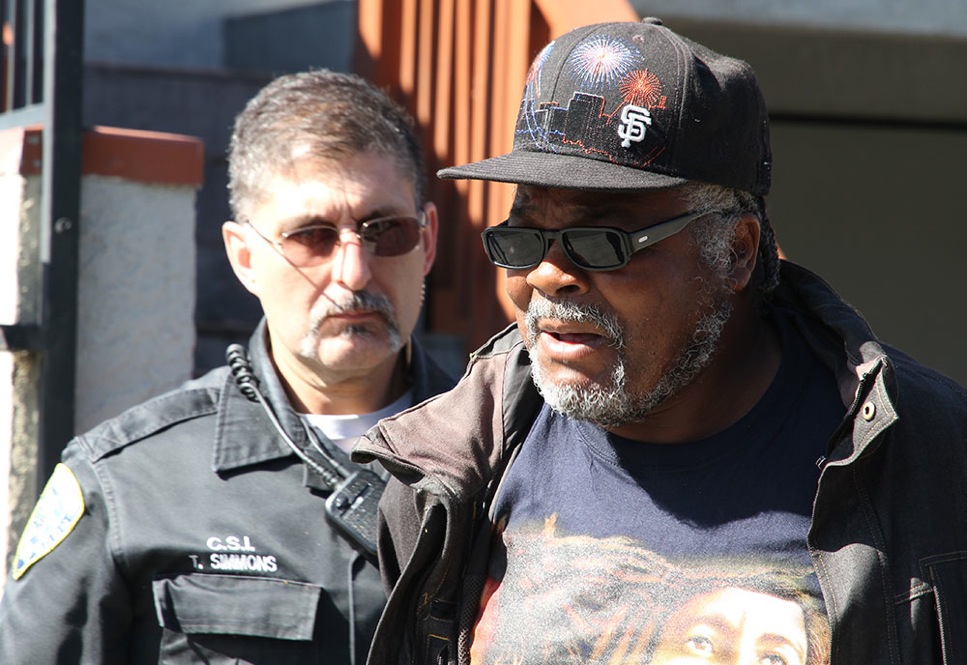 55-year-old parolee is arrested after being found at an unauthorized address. 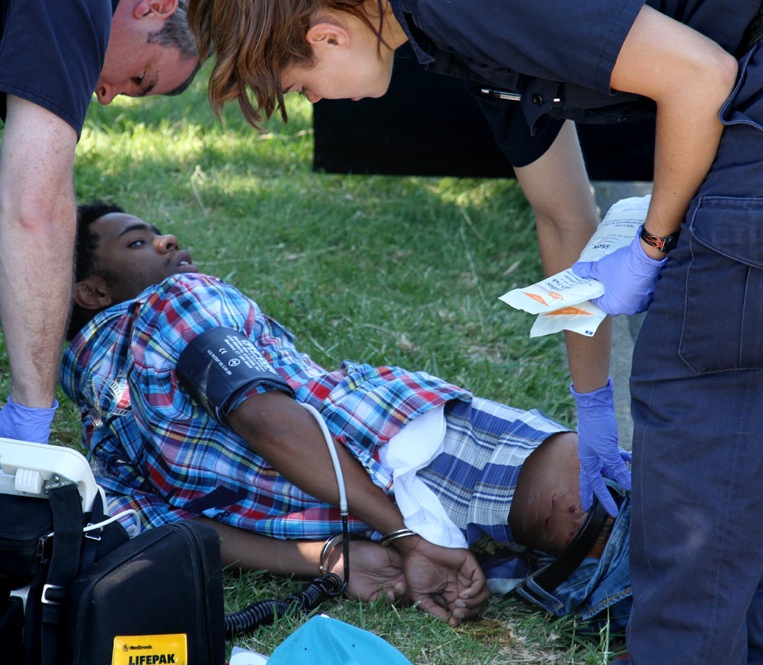 Paramedics work on this parolee, who was arrested after being bitten by a police dog. 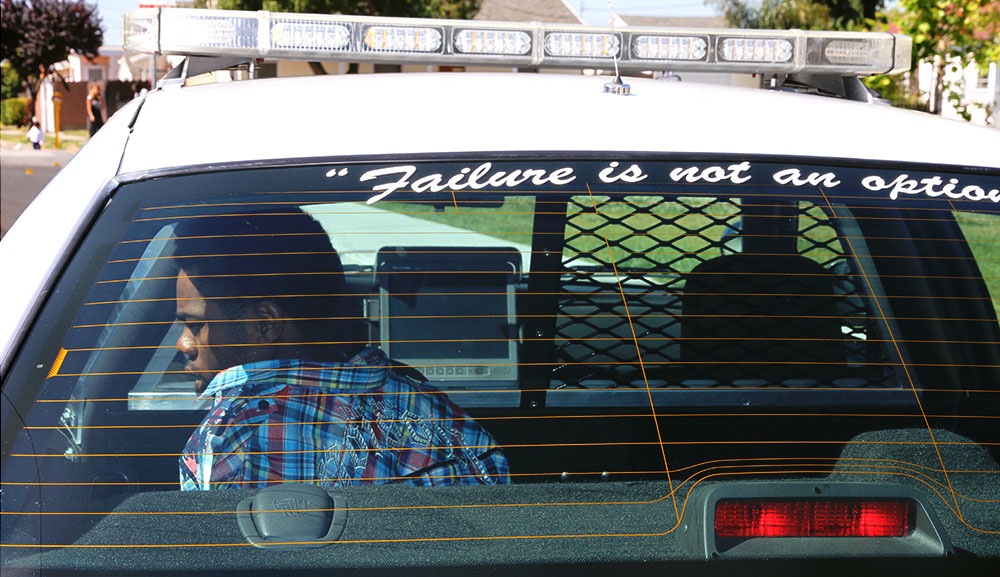 This parolee was arrested for removing his GPS tracking ankle bracelet and evading police.

The interagency collaboration is part of the state’s most significant effort in decades to reduce prison overcrowding, which will inevitably revolve around how well parolees are monitored and able to reintegrate into communities.

Currently, about seven in 10 parolees return to prison within three years of their release according to Office of the Governor’s website.

The scene last month in Richmond–part of bi-monthly sweeps to keep tabs on parolees–would have been impossible just a few years ago. But in recent days, pressed by a burgeoning population of parolees streaming into the city weekly and court mandates that virtually ensure that more will hit the streets in coming years, Richmond police and state parole agents have been working as partners.

The ever-growing population of ex-convicts continues to be an onerous burden on the state’s sagging financial condition. At the same time, a court-ordered reduction in prison population has administrators in the $8 billion system scrambling for solutions.

Richmond is a city of about 100,000 and deemed by FBI statistics as the second most dangerous city in the nation. Law enforcement officials there say a more effective partnership with state parole officials has been key to handling the influx of parolees.

Richmond’s program is modeled after the California’s Police and Corrections Team (P.A.C.T.) approach, which was pioneered in Oakland in the late 1990s as a response to soaring rates of absconding parolees, Pacheco said.

“It’s a cool setup,” said Monahan, a 16-year Richmond police veteran. “We share information and resources, and we work together to conduct compliance checks in the community a couple times a month.”

There are nearly 400 parolees in Richmond at any given time, Monahan estimated, about 40 of which are deemed “high-risk” felons and are outfitted with GPS ankle bracelets.

“There’s a recognition that this is the population that we’ve really got to be focusing on,” said Richmond Police Chief Chris Magnus who, along with regional parole leaders, helped form a partnership that includes office space for parole officials at police headquarters. “And now we’re coordinating our resources better than we did in the past.”

On a recent June morning, two teams of police from Richmond and San Pablo, along with several agents from state parole, fanned out in Richmond to drop by unannounced at the addresses of dozens of local parolees.

In the first hour, three had been arrested and taken to the local station for processing. Before the day was out, at least 10 parolees had been arrested for reasons ranging from being found at an unauthorized address to running from police. Police and parole agents swept through about 30 homes and apartments that day.

“It’s not about taking them back into custody,” Monahan said. “It’s about helping to give clear direction in an effort to keep people in compliance.”

Pacheco agreed. He said it is crucial for cities and the state to work together more closely to reduce the rate at which parolees return to prison.

But in practice, parolees are often sent back to prison for minor violations, not committing new crimes.

At around 11 a.m. that day, Pacheco decided to take a paroled serial drunken driver, a 55-year-old man, back into custody for being at the wrong address. The man told Pacheco he was visiting his girlfriend.

“You lied to me, and now you’re going back,” Pacheco scolded the man before directing agents to put him in the back of a Richmond police cruiser. The police-parole partnership includes twice monthly re-entry orientation meetings in the community for freshly paroled Richmond residents. Every two weeks 20 to 30 people are released into the community from state prison, Pacheco said.

About 11 percent of the state budget, or roughly $8 billion, goes to the California Department of Corrections and Rehabilitation, according to state records.

Magnus said the partnerships and compliance checks are part of a solution not only to Richmond’s crime woes, but the state’s corrections crisis.

“It’s really important that parolees get a series of messages early on when they come back to the community,” Magnus said. “First and foremost the message needs to be we care about you… but there also has to be the expectation that they are going to meet us halfway in terms of doing everything they can to stay out of trouble.”

Editor’s Note: This video story package was originally published by KTVU and was produced by the UC Berkeley News21 project, a Carnegie-Knight-funded initiative on the future of journalism. The news was reported by Guilherme Kfouri and Robert Rogers.