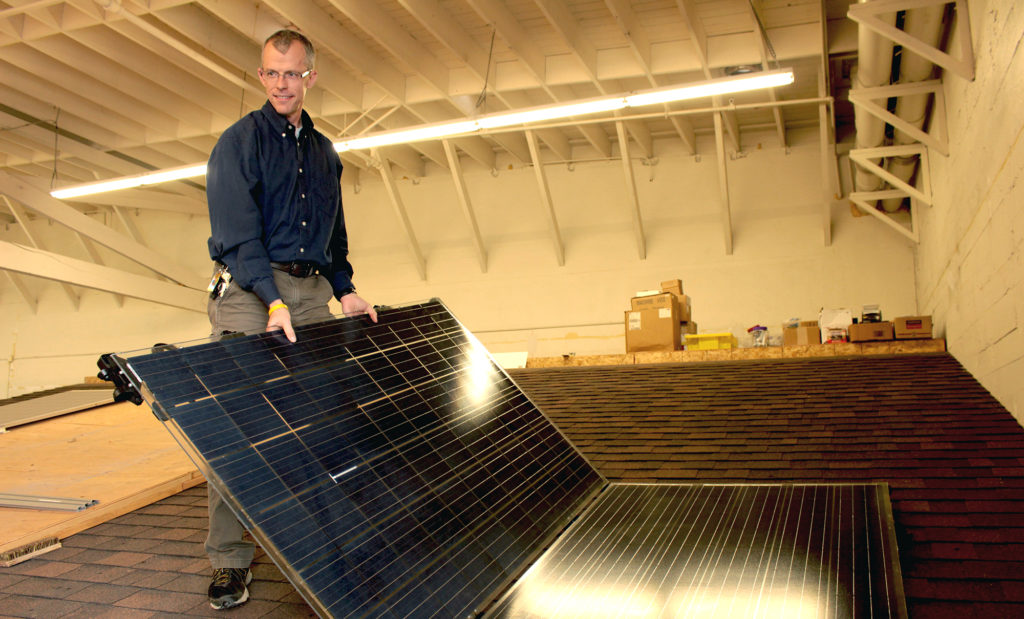 Richmond-based solar-panel manufacturer SMASHsolar Inc. will unveil a new type of solar panel on Tuesday that is easier to install and will significantly cut down the time it takes installers to mount them onto roofs.

While many conventional solar panels first require a mounting system to be installed on the roof by a team of trained professionals, SMASHsolar’s new product is simple enough that a contractor with minimal training could install it in about half the time. The company is launching the new panel at the annual Solar Power International conference, North America’s largest solar trade show, taking place this week in Las Vegas.

“I unpacked the reason for a lot of the cost and complexity, and a lot of it has to do with how hard it is to install,” said SMASHsolar founder and CEO Troy Tyler. “The construction guy in me started thinking about how I can make it easier to install.”

To illustrate his point, Tyler climbed onto a demo roof in the company’s headquarters near Marina Bay and snapped two solar modules together with a simple click.

According to Tyler, SMASHsolar’s product costs about the same amount as a conventional solar panel, but the reduced installation time allows home owners to save on installation costs.

Tyler was originally trained as an architectural engineer, but after working in the construction business, he entered the solar industry. He got his start in solar as a senior manager at the Richmond office of SunPower Corp., a company that designs and manufactures solar panels.

The solar industry in Richmond is beginning to take off, with industry heavyweights such as SunPower setting up local offices, and newcomers like SMASHsolar and Alion Energy starting up. There are also numerous solar installation companies, like A1 Sun and Ally Electric and Solar. SMASHsolar has been trying to differentiate itself by developing panels that are easier and cheaper to install. SMASHsolar’s current designs are frameless panels that snap together and are bolted straight into the roof.

These improvements could make a difference as the nation focuses more on solutions that could help the country reduce fossil fuel emissions.

Last November, at the international climate conference in Paris, the United States committed to reducing the country’s emissions to between 26 and 28 percent below 2005 level by 2025.

In California, legislators recently passed a law that aims to reduce fossil fuel emissions to 40 percent below 1990 levels by 2030. For those goals to be met, many more renewable energy projects will need to be up and running, fast, and products that simplify and speed up solar panel installation are an important next step.

Kelly Marston, SMASHsolar’s director of operations, said that its new panel has the potential to broaden the market.

“We’ve worked with roofers who aren’t trained and don’t spend all of their time installing solar, and they’ve been able to be successful with our system,” she said.

Cheryl Vaughn, executive director of Solar Richmond, a non-profit group that helps low income and under-employed Richmond residents get vocational training in the solar industry, says she welcomes technologies like SMASHsolar’s new product because it could open up new job opportunities for people locally.

Tyler said the company will first offer the panels through a pilot program before scaling up manufacturing. Once it does, he believes it could create more jobs in Richmond.

“I want to support Richmond,” says Tyler. “I think Richmond has a lot of opportunity to grow, and if we can help in some small way, that’d be great.”