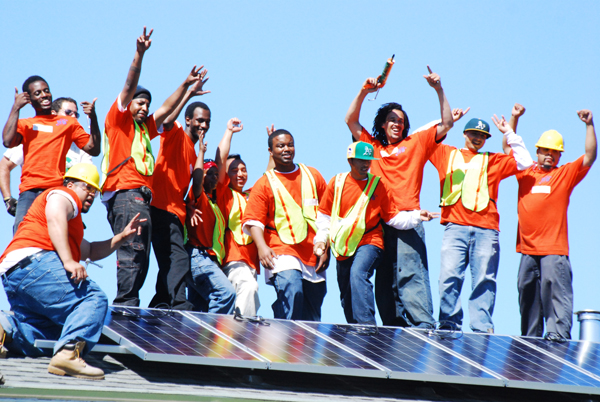 Chevron split a million-dollar grant last week between five Richmond non-profits against a backdrop of city officials’ efforts to obtain many more millions from the oil giant through taxes.

The beneficiaries of the Chevron grant were Lao Family Community Development, Inc., Solar Richmond, The Latina Center, The Stride Center and Catholic Charities.

The grant came from Chevron’s new California Partnership, a program investing in education and job creation, that was launched a little more than a month ago.

“This initiative is very welcome in Richmond, which suffers an unemployment rate of more than 18 percent,” said Jeff Ritterman, a Richmond City Council member who was part of the selection process.

“I can attest to the rigorous selection process which we employed.  I believe the awardees of this grant have been well chosen.”

While gracious to Chevron employees who organized the grant program for Richmond non-profits, Ritterman took a different tone in a letter he wrote to introduce an initiative he has dubbed “End Chevron Perks.”

In it, he pointed out the millions more he said he wants Chevron–the city’s biggest taxpayer by far–to pay in utilities taxes and the Measure T raw material tax, which the company is suing the City of Richmond for in order to get back $21 million.

“It’s a sad time when a city of 100,000 residents, which is fighting for its very financial survival, is sued by a corporation which earned over $20 billion in profits in 2008,” Ritterman wrote. “Chevron has chosen to fight against the declared will of the people of Richmond in order to maximize its profits, no matter what the cost to our city.”

The city is not spending the $21 million it has now from the tax until a final ruling is made in the case.

Ritterman will be formally launching his End Chevron Perks campaign to increase the company’s utilities tax on Wednesday, January 13, 2010 from 7 to 9 p.m. at 402 Harbor Way in Richmond. The council member said in a letter introducing the campaign that he thinks a November 2010 ballot measure could close a loophole that lets Chevron pay less than the 10 percent utilities tax other Richmond property owners do.

Earlier this year, Chevron already paid the City of Richmond a $28 million settlement after the city’s audit found the company had underpaid its utilities taxes in the past.

Before Measure T passed, Chevron’s Richmond refinery paid double the total amount of local taxes, licenses and fees than what its two other U.S. refineries in El Segundo and Pascagoula paid, according to Brent Tippen, a Chevron spokesperson.

“Other refiners in the Bay area are not subject to the same local city taxes, and their county property taxes are also lower when you adjust for size and complexity,” Tippen said.  “In Richmond and Contra Costa County, we face challenges that put our company at a competitive disadvantage compared to other Bay Area and California refiners, both from a tax and environmental standpoint.”

The grant recipients announced last week were selected for their ability to contribute to quality vocational education and small to medium-sized economic development programs in Richmond.

At a time when the struggling economy has choked many of the donation and grant programs non-profits depend on, leaders of the organizations awarded were grateful.

“This funding allows us to expand our program at a time when our community is experiencing record unemployment and the community needs our services more than ever,” said Miriam Wong, executive director of The Latina Center.

The grant brings Chevron’s total monetary contributions to Richmond non-profit organizations to $3 million this year–about double the amount the company gave in 2008.

“For the more than 100 years Chevron has been a part of the Richmond community, we’ve been committed to supporting economic development and job creation in the region,” said Mike Coyle, General Manager of Chevron’s Richmond Refinery, in a statement about the grants.

To date, Chevron has invested $28 million in grants across the state for 2009.