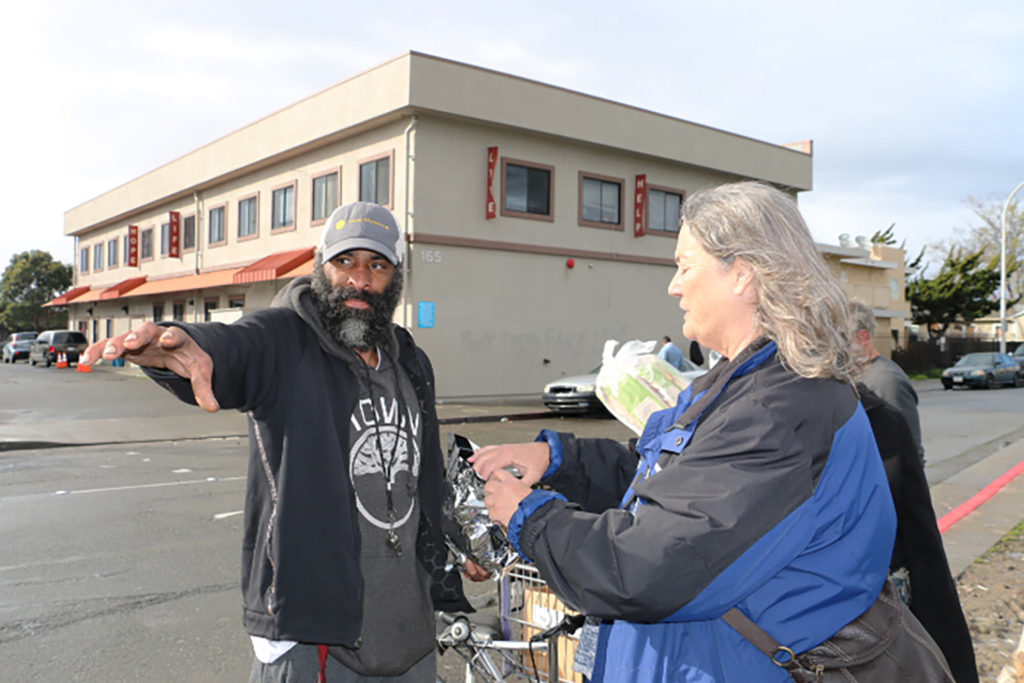 A dozen Richmond residents gathered under a large metal structure on a Saturday afternoon in a park on the greenway as rain poured and thunder rumbled. The objects at the heart of their mission—hot soup, fresh produce and toilet kits—stayed safely dry as they heard from one of the homeless residents they were intent on helping.

“Listen to the homeless people,” said Terry Walker Jr, a Richmond native who has been homeless for 15 years. And that’s exactly what the group intends to do.

The fourth Street Survival Meet-up, which commenced on the afternoon of February 9, is a creation of Jan Gilbrecht, a Richmond resident and community organizer. She modeled the gathering on a needle exchange program where she volunteered on and off for more than a decade. The strategy is to set up at the same location every week, rain or shine, and to pass out items homeless people need to survive while living outdoors.

“It really felt like it was time to take it to another level in terms of not sitting in rooms somewhere talking about things, but actually trying to interface with folks in the community and start identifying solutions,” Gilbrecht said.

Gilbrecht’s idea is  simple—provide a hot meal, fresh food and a toilet to any neighbor that needs it. Volunteers spooned out homemade hot vegetable soup and cut baguettes on the large picnic tables for people who live in the neighborhood and in nearby homeless encampments. A couple of volunteers headed to nearby encampments to deliver food and 50 disposable toilet bags that the organizers hope will make the camps more livable.

Daniel Barth, a Richmond resident and one of the founders of Richmond Safe Organized Spaces, brought two truckloads full of donated food by local stores and churches and urged people to take whatever they need. “Take bread!” he shouted to a couple of people perusing the medley of food on the tables.

A combination of housed and homeless neighbors trickled in to serve themselves hot bowls of soup and bring home pre-packaged salads and fresh produce that will last them for the week.

The number of homeless people in Richmond is recorded by the county’s rudimentary point in time count, which estimated 270 people were sleeping on Richmond’s streets on any given night last year. An estimated 15 percent of Richmond residents live below the poverty level, according to the U.S. Census.

Michelle Ocean, 33, and her 8-year-old son live nearby and wandered over after hearing about the free fresh vegetables. She left with a large garbage bag full of kale, cabbage, apples, potatoes, lemons and fresh mint. “It’s a nice alternative, especially because there is only one grocery store in the neighborhood,” Ocean said.

Other neighbors came to eat and volunteer. Berlinda Buleson, a life-long Richmond resident, finished her soup and then promptly started organizing the donated produce on the picnic tables. It was her first time at the gathering, but she’s signed up to come back next week.

“I’ll try to be here to help them setup the tables,” Buleson said as she took vegetables out of the boxes for people to take.

Around 3 p.m.. Gilbrecht and two other volunteers made a trip to an encampment a few blocks away to deliver the biodegradable toilet bags and a couple boxes of food. Gilbrecht knows that people in encampments typically stay in their tents to watch over their belongings. So the volunteers loaded up a black Prius and traveled to them instead.

Walker met them at the foot of the damp encampment to help distribute the bags to 25 tents.   “They are simple, fast and easy to use,” Walker said as he showed an elderly man who came out from his tent to learn how to use the bag and throw it away. “This is a real, real solution that will help out a lot of people.”

The bag idea was in response to people at encampments telling Gilbrecht that they don’t have access to bathrooms at night. Some nearby public restrooms are open during the day, but most are closed by 5 p.m.

The organizers also hope the bags will keep the encampments cleaner for people living in them and make evictions less frequent. The accumulating waste is one reason encampments in Richmond are abated so often by police, according to Gilbrecht.

Back at the park, the rain persisted, but people, their coats wet and hair damp, continued to wander in and leave with bags full of food. One woman who lived in the neighborhood rushed under the structure to get out of the rain and ended up leaving with spaghetti squash. She asked a volunteer how often free food is available at the park and when she learned it was every weekend she gasped: “Every Saturday, really?”

As 4 p.m. approached, the winds picked up and volunteers started collecting the leftover food to either donate it or deliver it to encampments. One volunteer gathered vegetables to make the soup for next week.

The volunteers will continue to offer food, toilet bags and other donated items every Saturday with the hope of eventually helping other neighborhoods in Richmond start their own similar programs. “Maybe we can do a meetup on the other side of the Iron Triangle, towards Point Richmond and another one in North and another one in the Annex and another one near Park Plaza,” Barth said.

Walker plans on being the group’s liaison to different encampments to tell the organizers what people need, so that specific items are donated. He also signed up help distribute the bags and food. “The only way it’s going to work is if we all help each other,” he said.