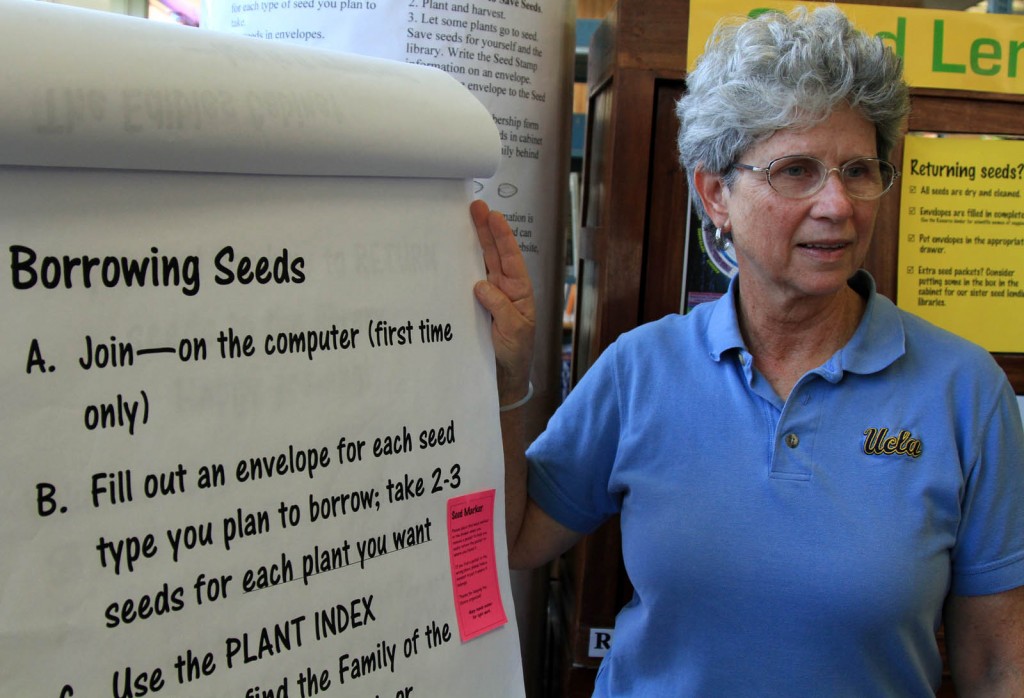 Growing your own food is not only fun, but it is also important for biodiversity. This idea is the foundation for Richmond’s free seed lending library located in the Richmond Public Library.

When we first visited Richmond’s Seed Library in June last year it was a fresh idea popularized by its coordinator, Rebecca Newburn, and other garden-lovers volunteers. Today, exactly one year from its launch in May 2010, the library has between 350 and 400 users.

The way it works resembles the traditional, book-based libraries. In order to borrow seeds, one has to register, find appropriate seeds and fill out a form.  However, the return policy is significantly different. Users are encouraged to give back new seeds from their harvests in order to make the library self-sustaining. In addition to seeds, the library provides education about growing and saving seeds, gardening classes and leaflets with gardening-related information.

The few colorful cabinets filled with seeds of various kinds have become an inherent part of Richmond’s Public Library landscape.

“Saving seeds is the idea whose time has come,” says Trish Clifford, who runs the library’s orientations for potential users, and is also a member of its steering committee. “We got a lot of good publicity. Recently we had stories in Organic Gardening magazine and the San Francisco Chronicle. Our library was also mentioned in the New York Times, as they did an article about the seed libraries.” The reason for the wave of public interest, according to Clifford, is the fact that people have realized that a lot of seed diversity has been lost over the last generation. “Food markets are commercialized and mass-production oriented,” she said. “I’ve heard about the ridiculous idea of growing square tomatoes that would fit better into the boxes. We don’t want square tomatoes in Richmond.”

It seems that Richmond’s citizens feel the same way. According to Clifford, the seed library has the wide range of users of every age, gender, and ethnicity. “It’s quite a cross-section,” she said. “The most popular seeds are those of tomatoes, peppers and cucumbers.”

“We also familiarize people with our seeds’ categories,” says Clifford. “They are divided into herbs, flowers and edibles, but also into ‘super easy’, ‘easy’ and ‘difficult.’” The “easiness” level does not however refer to the difficulty of growing or collection of seeds, but to the ease of getting ”true,” not modified, seed from the plant.

To promote biodiversity and the idea of growing food, the library not only offers free seeds, but also organizes seed saving classes. The next one will take place on Tuesday, May 24. “It’s all about skills building,” Clifford says. “The concept is to train people to have seed growing skills because it is connected to food security.”

The Richmond Grows Seed Lending Library is open to everyone. People who want to borrow seeds from the library are encouraged to watch a short video explaining the process of registration and the way library operates or attend the 45-minute orientation offered few times a month. The main idea behind the library is to support sustainable food production and gardening.

During orientation, potential gardeners can find out about the Richmond Grows project, which includes a website with all kinds of information concerning food saving, and get information about how is the library organized and how to borrow seeds. The main intentions of the program, like sharing knowledge, maintaining heirlooms and locally-adapted varieties of plants, propagating biodiversity and of course sharing the pleasure of growing food, are also explained.

After explaining the process of borrowing seeds, Clifford encourages users to volunteer with Richmond Grows. There are many possibilities. One can lead orientations, help to keep the Seed library tidy, grow specific plants for the library or even teach classes on propagating and collecting seeds.

In line with the library’s return policy, users are expected to return new seeds from the resulting plants. However, this is not a strict rule. “We don’t police that in any way. It’s kind of the honor system,” says Clifford. “What is important for us is the knowledge and skills that people get by using the library.”